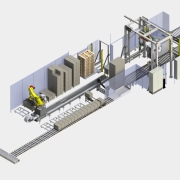 Sorting of cardboard boxes
A Fanuc R-2000iC/165F 6-axis industrial robot mounted on a linear axis picks up the cardboard boxes and sorts them into a total of 12 positions. The products are identified by a barcode scanner at the infeed and checked against a database.

Feeding of empty pallets
Using a specially developed gripper, individual pallets can be removed from a stack, turned and aligned. The one-way pallets are fed in stacks by a light barrier without having to interrupt the process.

Wrapping
The finished pallets are then wrapped, whereby different wrapping programs can be preselected depending on the order. The wrapper is equipped with a cover film application and an automatic film sealing system.

Labeling
After wrapping, the pallet is automatically labeled. The labeler is controlled by the system control and the data to be printed is read directly from a database.

This website uses cookies to improve your experience while you navigate through the website. Out of these, the cookies that are categorized as necessary are stored on your browser as they are essential for the working of basic functionalities of the website. We also use third-party cookies that help us analyze and understand how you use this website. These cookies will be stored in your browser only with your consent. You also have the option to opt-out of these cookies. But opting out of some of these cookies may affect your browsing experience.
Necessary Always Enabled
Necessary cookies are absolutely essential for the website to function properly. This category only includes cookies that ensures basic functionalities and security features of the website. These cookies do not store any personal information.
Non-necessary
Any cookies that may not be particularly necessary for the website to function and is used specifically to collect user personal data via analytics, ads, other embedded contents are termed as non-necessary cookies. It is mandatory to procure user consent prior to running these cookies on your website.
SAVE & ACCEPT